You Are Here: Home → Dustin Johnson posts 5-under 66 for 1-shot lead in Boston 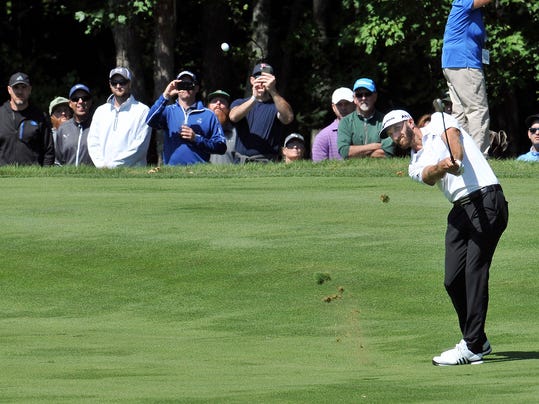 Dustin Johnson of Jupiter, Fla. hits from the second fairway Friday, Sept. 1, 2017 during the first round of the Dell Championship golf tournament at the TPC Boston in Norton, Mass. Johnson finished the round at -5. (Mark Stockwell/The Sun Chronicle via AP)(Photo: The Associated Press)

NORTON, Mass. (AP) — Now that he’s finally won again, Dustin Johnson is starting to look as dangerous as ever.

One week after Johnson ended a five-month dry spell brought on by a back injury, he easily handled the early cold and a steady win at TPC Boston for a 5-under 66 to take a one-shot lead in the opening round of the Dell Technologies Championship.

And the world’s No. 1 player made it look easy on a tough day for scoring.

He started with a 35-foot birdie putt on No. 10. He made the turn with a 6-iron from 220 yards that sailed high and rode the left-to-right wind into 4 feet for eagle. When another big tee shot settled into a divot on the reachable par-5 second hole, he laid up short of the water and still made birdie.