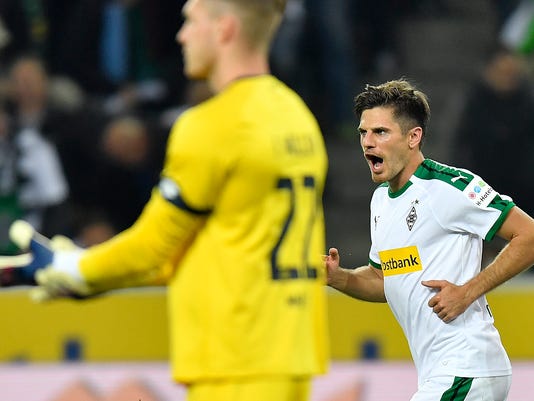 BERLIN (AP) — Jonas Hofmann scored a classy hat trick to move Borussia Moenchengladbach to second place in the Bundesliga with a 4-0 win over visiting Mainz on Sunday, while Hertha Berlin was frustrated by VAR in the early game.

Thorgan Hazard also starred in another fine performance from ‘Gladbach after Dieter Hecking’s team beat Bayern Munich 3-0 away in the previous round. Hazard scored one and set up Hofmann’s first two goals against Mainz.

Hofmann opened the scoring in off the far post in the 21st minute and grabbed his second after the break, five minutes before Alassane Plea set up Hazard.

Hofmann completed his hat trick a little after the hour-mark.

‘Gladbach is three points behind league leader Borussia Dortmund after eight rounds, ahead of Werder Bremen on goal…