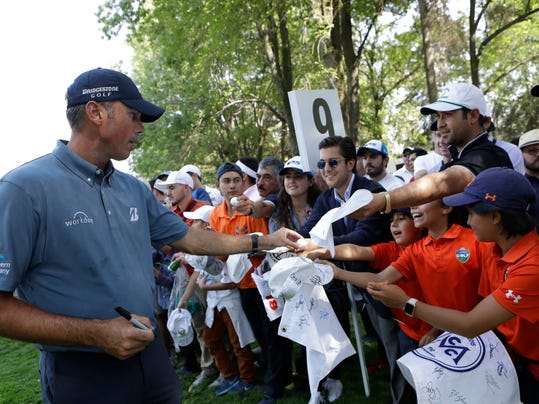 Matt Kuchar of the U.S. signs autographs for fans as he leaves the ninth hole after practicing on the high-altitude course at Chapultepec Golf Club a day before the start of the Mexico Championship, in Mexico City, Wednesday, March 1, 2017. All but one of the world’s top 50 golfers will contest the World Golf Championship PGA event, which this year relocated to Mexico City from the Trump National Doral Resort in Florida. (AP Photo/Rebecca Blackwell)(Photo: The Associated Press)

For the first time since 1962 — before Jack Nicklaus had won any of his 18 majors — the PGA Tour will not have a tournament at Doral this year. Doral had hosted a World Golf Championship event the last nine years until Cadillac did not renew as title sponsor and the tour couldn’t find another that wanted to be at what is now Trump Doral. It found a sponsor in Grupo Salinas, giving birth to the Mexico Championship.

Adam Scott is the defending champion in a country where he has never played.

“It’s nice to go back to the course that you played really well on, but it’s just another week, and…