You Are Here: Home → Oilers overcome late collapse, down Ducks 6-5 in shootout 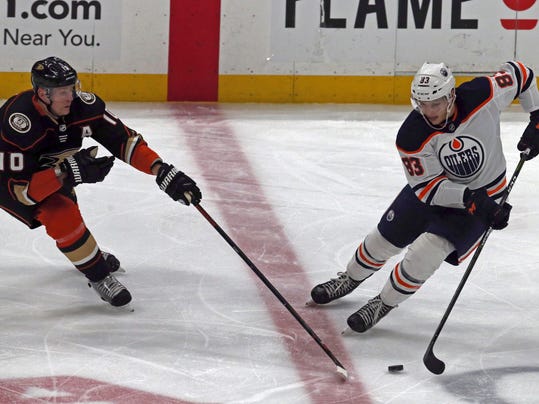 ANAHEIM, Calif. (AP) — Ryan Strome scored twice and the Edmonton Oilers recovered to beat the Anaheim Ducks 6-5 in a shootout Sunday after giving up two goals in the final 21 seconds of regulation.

Leon Draisaitl scored in his third straight game for the Oilers, who have won three in a row and four of five. Al Montoya made 41 saves, and Anton Slepyshev and Iiro Pakarinen also scored. Connor McDavid had three assists.

Rickard Rakell had a hat trick and Ryan Getzlaf added a goal and two assists for the Ducks, who have earned at least one point in six consecutive home games. Adam Henrique also scored, and Ryan Miller stopped 37 shots.

Rakell scored with 20.9 seconds remaining in the third period to make it 5-4 and then tied it with 6.3 seconds to play. He beat Montoya with a wrist shot from the slot after Derek Grant won the faceoff against Draisaitl.

Draisaitl and McDavid scored in the…