You Are Here: Home → Sabres rally from 3-goal deficit to beat Blue Jackets 5-3 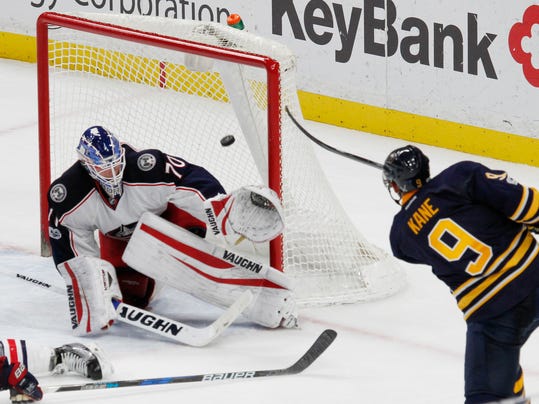 BUFFALO, N.Y. (AP) — Evander Kane scored a power-play goal with 2:29 remaining and the Buffalo Sabres rallied from a three-goal deficit to beat the Columbus Blue Jackets 5-3 on Saturday night.

Sam Reinhart, Matt Moulson and Jake McCabe scored to tie it and Jack Eichel added an empty-netter for Buffalo. The Sabres snapped an 0-3-1 skid and improved to 2-6-2 in their last 10. Robin Lehner stopped all 24 shots he faced after taking over for Anders Nilsson to start the second period. Nilsson was yanked after giving up three goals on 12 shots.

The Blue Jackets (43-17-6) had a three-game winning streak snapped and blew a chance to set a franchise record for most wins in a season.