You Are Here: Home → Secrets of NBA super-fan Jimmy Goldstein

Goldstein explains his love for the playoffs and how the NBA Finals have dramatically changed since he first started attending games.
usa today sports 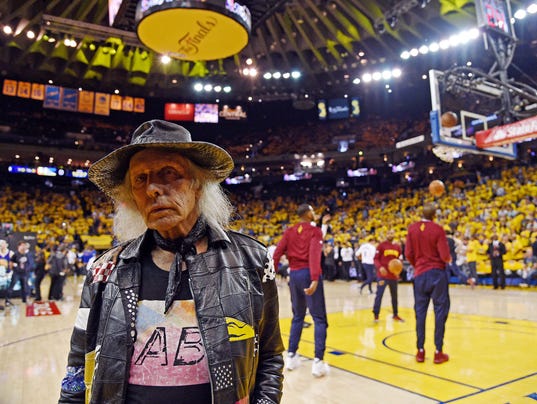 Jimmy Goldstein has been attending NBA Finals games for more than 20 years, including Game 2 on Sunday between the Warriors and Cavaliers.(Photo: Kyle Terada, USA TODAY Sports)

OAKLAND — Abruptly, less than an hour before Game 2 of the NBA Finals at Oracle Arena, a security guard outside the lounge reserved for the Golden State Warriors’ owners spread his arms.

An older man with a slight stoop, a subtle strut and long, frizzy hair approached in an all-black ensemble: python-skin hat, leather jacket with colored patches, studded leather pants, leather boots and a neck scarf. The man stopped amid gawkers and stared expressionless at the security guard, who suddenly broke into a smile.

The leathered man returned the smile and suddenly they were headed to the owners’ lounge.

In NBA circles, James “Jimmy’’ Goldstein, 76, is almost as recognizable as Steph Curry, LeBron James and the other star players.